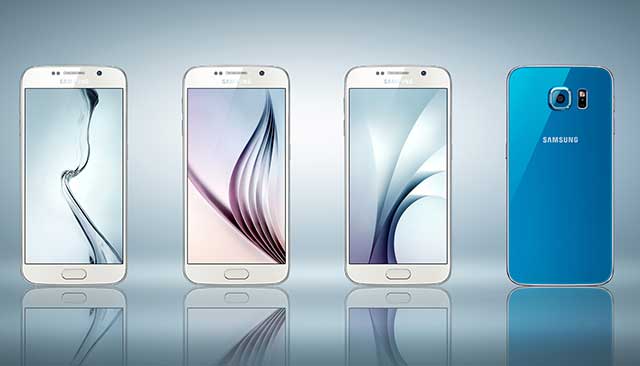 It’s time to ring those changes! Samsung again excites us, this time with the S6, its latest flagship device in the Galaxy range.

Whenever a new phone is released it has to be good – really good, and this time round Samsung has definitely delivered. Out with the plastic trim and in with toughened glass and satin-finished metal. Out with a 1080p screen and in with a breathtaking QHD display. But, all of this this doesn’t come without compromise.

Contoured aluminium rims, similar to those seen on the Note 4, now frame ‘Gorilla Glass’ front and back plates. Screen size is the same as the Galaxy S5 at 5.1 inches. Resolution has jumped from 1080 x 1980 to 1440 x 2560 delivering a true QHD display with pixel density coming in at a staggering 577 pixels per inch! The question is, of course, with all these pixels how will the S6’s 2550 mAh battery fare?

Samsung’s choice of internal hardware is interesting. First, it’s opted for its own Exynos processor instead of the tried and trusted Qualcomm Snapdragon 810, a change likely to be applied to all other flagship handsets this year. Secondly, Samsung has decided to call time on the microSD card, a standard feature on previous devices. Now you have to choose your memory from the outset – take your pick of either 32GB, 64GB or 128GB.

The 3GB of RAM should deliver velvet-like performance, ably assisted by Samsung TouchWiz, running on top of Android 5.0 Lollipop.

Gone is the removable battery – a familiar feature of most Samsung mobiles – replaced by an integrated cell that Samsung reckons will take just eighty minutes to fully charge from a standing start. What’s more, a paltry ten minutes of charging will provide two hours of video playback. Wireless charging is standard without having to add any external case or attachment.

Cameras have always been one of the South Korean manufacturer’s strong points and the S6 is no exception boasting a 16MP rear-facing sensor with smart optical image stabilisation, along with a 5MP front-facing unit. A new feature is the ability to open the camera in less than a second by double-tapping the home screen.

So, is trading your trusty Galaxy S5 – a device that is water resistant, has a removable battery and a microSD slot – for the super-sexy Galaxy S6, complete with custom-curves, QHD display but, technically, a smaller battery, going to be worth it? I think so.

The Android market is becoming more and more competitive – and the stakes are high. With the S6, Samsung has certainly created something special, giving pretty much everything else out there a furiously fast run for its money.